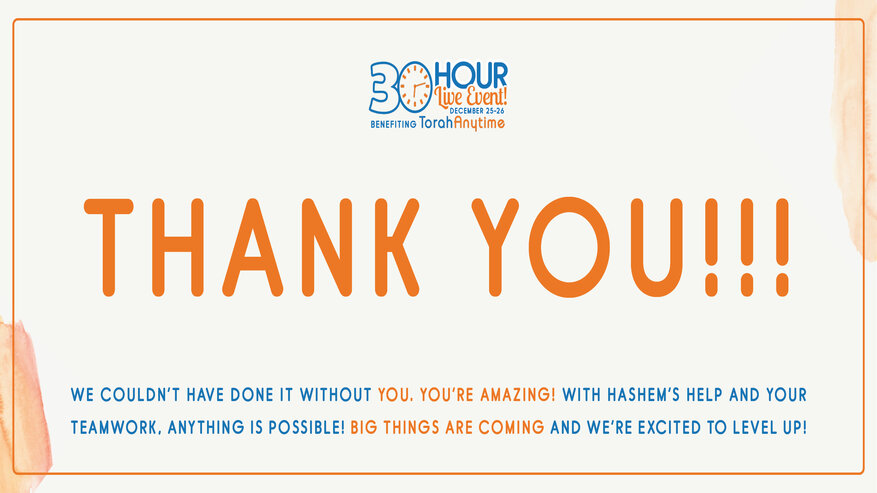 TorahAnytime‘s well-deserved reputation as “the largest yeshiva in the world without walls” invites all Jews to be a partner in its growth. More ...

December 6, 2021 – TorahAnytime Headquarters (New York) –The indefatigable team at TorahAnytime announces the launch of a December 25th -26th mega-event that will take place at Congregation Yad Yosef in Brooklyn, NY, in both in-person and virtual formats. Participants will be treated to thirty hours of inspiring words, Torah commentary, and entertainment, with the goal of raising $2 million in matched funds to support many of TorahAnytime’s current and future projects.

The Covid pandemic set off a surge in usage at TorahAnytime as Jews from around the world hungered for Torah, chizuk and inspiration to see them through the troubling times. Responding to that surge, TorahAnytime’s website now logs over one million users, and its newly released  App has been downloaded by tens of thousands of users in just a few months. The Daily Dose, a platform that sends out short, powerful, and life-changing video clips from top TorahAnytime speakers, was first launched in 2019. Currently, it has over 40,000 subscribers and can be accessed by WhatsApp, Podcast, Instagram, email, Naki radio, and even a dial-in hotline. The TorahAnytime hotline, which jumped from 8,000 callers in its initial 2015 launch, to over 134,000 callers, is now in the middle of a major upgrade, while the TorahAnytime newsletter addresses over 125,000 subscribers.

Answering the call of its driven users, TorahAnytime is working on a major redesign of its website, and is being re-engineered to allow it to work hand-in-hand with its revolutionary new App, which is constantly getting weekly updates and enhancements. These upgrades are scheduled to be launched within six to eight months; they will make the TorahAnytime user experience even more incredible and will allow for more Torah learning for Jews from all walks of life. A new sibling to TorahAnytime, called ChesedAnytime, which only recently launched and already connecting over 4,000 users, is a platform that matches those in need with individuals looking for and offering chesed opportunities throughout the world. As if all this wasn’t enough, TorahAnytime is now developing a massive new platform, to be named TorahAnyONE, to serve the not-yet-religious, the beginner and the curious.

Historically, TorahAnytime has successfully outsourced its technology development, but it has grown immeasurably and recognizes the need to start to build its own in-house development team. Says Rubin Kolyakov, Co-founder and Tech director at TorahAnytime, “There is so much more we can do, but everything depends on technological development. We need to be able to  pump out more Torah programming and keep up with technology’s constant growth.” His brother, Shimon Kolyakov, Co-founder and Director at TorahAnytime concurs, “Technology is not going away. Every minute that someone logs onto one of TorahAnytime’s platforms, is a minute he or she is not visiting other wasteful, or even dangerous, web locations.”

Since Covid started, TorahAnytime has already doubled its staff – but its usage has tripled. Where is all this action generated? TorahAnytime is based in a tiny 400 square foot office space that is bursting at the seams. TorahAnytime needs funding for constantly upgrading and maintaining its website, mobile App, hotline, newsletter, development team and so much more. But additionally, it has its eye on a new property that will house the TorahAnytime Worldwide Headquarters and Studios. This new location will house its staff, its new development department, conference rooms, and audio, video, broadcasting, and sound studios. TorahAnytime’s objective is to create high quality Torah content and provide a safe and rewarding haven for technology. “A permanent headquarters will allow TorahAnytime to grow and will take it to uncharted levels,” says Yosef Davis, Executive Director for TorahAnytime.

For those who have been blessed with financial means, TorahAnytime’s need is your opportunity to become a major partner and help spread Torah learning throughout the world more than ever before. The select few who are able to shoulder this responsibility for worldwide Torah learning are invited to reach out to Shimon Kolyakov at Shimon@TorahAnytime.com and take advantage of opportunities to donate or dedicate and become a partner in this massive Torah-spreading endeavor. The unique donors who earnwill have the zechus to dedicate the new TorahAnytime headquarters and studios will generate a tremendous amount of Torah, mitzvos and zechusim for themselves and the world, and create an everlasting legacy for their families. “Come talk to us.” Invites Shimon Kolyakov. “Let us share with you our vision and how you can become a partner.”

For those of more limited means, TorahAnytime invites you to reach out to participate in their upcoming campaign by creating a TorahAnytime team page to help reach their campaign goal. If you've benefited from TorahAnytime and wanted an opportunity to give back, now is your chance. We need everyone to step up. We can’t do this without you. Join together in this exciting campaign to help TorahAnytime grow to meet the needs of fellow Jews. “Even though we are spreading more than ten million hours of learning a year, through nine different platforms, to over a million users, we can’t stop.” For more info on setting up a team page, go to TorahAnytime.com/team

Saturday night’s programming (Dec. 25 at 8pm EST) at the Brooklyn event, featuring Rabbi David Ozeri, Rabbi Paysach Krohn, and Rabbi Dovid Goldwasser will be broadcasted worldwide, with free limited in-person seating available as well, only by pre-registration. Both men and women can reserve their free seats at TorahAnytime.com/event. The following days live programming (Dec. 26 at 11am-8pm EST) will be an online event only. Hosted by Rav Gav Friedman and R’ Yossi Bensoussan, and will include various speakers, community leaders, Torah personalities, music, magic, and many special surprises will round out the program and captivate the whole family. Special messages from TorahAnytime followers will be featured as they share their compelling stories of struggle and success.

TorahAnytime‘s well-deserved reputation as “the largest yeshiva in the world without walls” invites all Jews to be a partner in its growth. “TorahAnytime needs you as supporters, teammates, and fellow learners.” says Shimon Kolyakov. “Remember, if Mashiach isn’t here yet, it means we have more work to do.”

After donating please email the campaign at info@torahanytime.com so your donation can be added

Thank you so much for your donation to the TorahAnytime campaign.